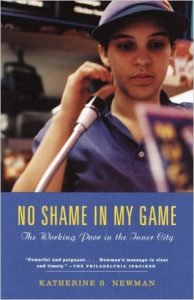 No Shame in My Game by Katherine S. Newman
In No Shame in My Game, Harvard anthropologist Katherine Newman gives voice to a population for whom work, family, and self-esteem are top priorities despite all the factors that make earning a living next to impossible–minimum wage, lack of child care and health care, and a desperate shortage of even low-paying jobs.

By intimately following the lives of nearly 300 inner-city workers and job seekers for two years in Harlem, Newman explores a side of poverty often ignored by media and politicians–the working poor. The working poor find dignity in earning a paycheck and shunning the welfare system, arguing that even low-paying jobs give order to their lives. No Shame in My Game gives voice to a misrepresented segment of today’s society, and is sure to spark dialogue over the issues surrounding poverty, working and welfare. 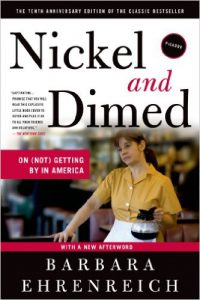 Nickel and Dimed by Barbara Ehrenreich
Millions of Americans work full time, year round, for poverty-level wages. In 1998, Barbara Ehrenreich decided to join them. She was inspired in part by the rhetoric surrounding welfare reform, which promised that a job — any job — can be the ticket to a better life. But how does anyone survive, let alone prosper, on $6 an hour?

To find out, Ehrenreich left her home, took the cheapest lodgings she could find, and accepted whatever jobs she was offered. Moving from Florida to Maine to Minnesota, she worked as a waitress, a hotel maid, a cleaning woman, a nursing-home aide, and a Wal-Mart sales clerk. She lived in trailer parks and crumbling residential motels. Very quickly, she discovered that no job is truly “unskilled,” that even the lowliest occupations require exhausting mental and muscular effort. She also learned that one job is not enough; you need at least two if you want to live indoors. 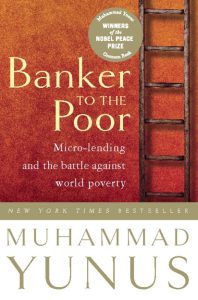 Banker to the Poor by Muhammad Yunus

This book is an autobiography of Muhammad Yunnus. In 1983, Muhammad Yunus established Grameen, a bank devoted to providing the poorest of Bangladesh with minuscule loans. Twenty-three years later they won the Nobel Prize for Peace for their work in eradicating poverty. This is an inspiring story of one man’s realization that access to even a small amount of credit can transform the lives of the poorest citizens of the world. 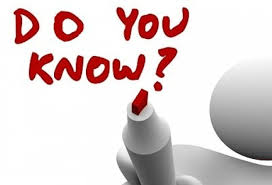